Today I have a very happy Summer mani and pedi to show you. And my review about the the new Stampaholics ST04 plate that I used to make these. I received that plate this week and had to use it immediately. I think it is such a lovely plate. And the weather is really nice here too, so what is better then to stamp my finger and my toe nails :) I always love a matching mani/pedi. First I'll show the nail art picture and at the end the pictures of the plate. So I have a lot of pics for you. 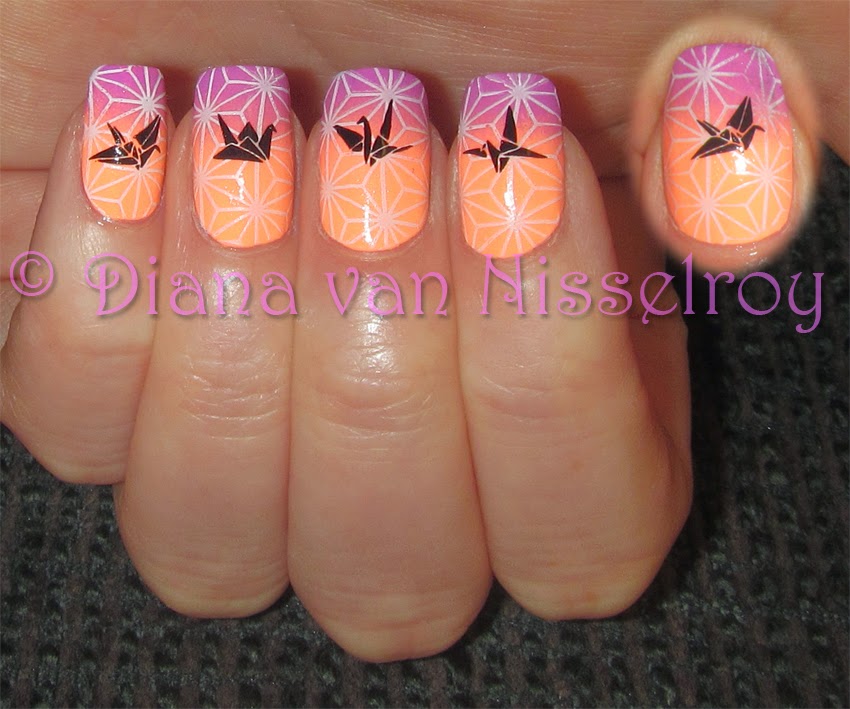 And here my mani with the matching pedi. 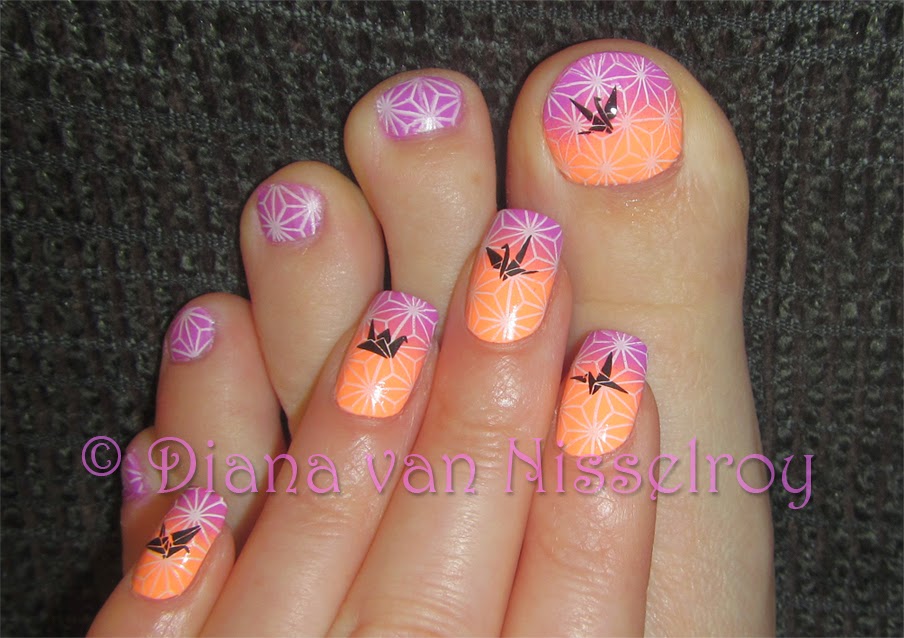 And a picture of both my feet. 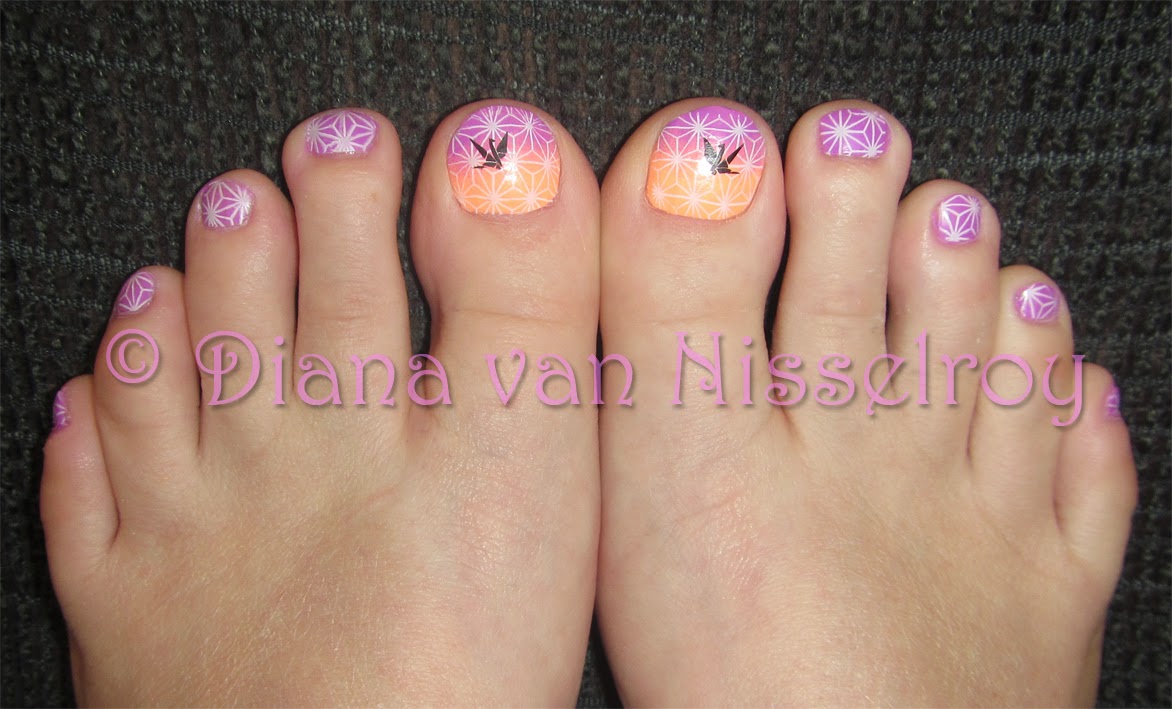 Ana from Stampaholics included a little origami paper so I could fold my own paper crane. My peace crane will get a nice place in my nail room :) 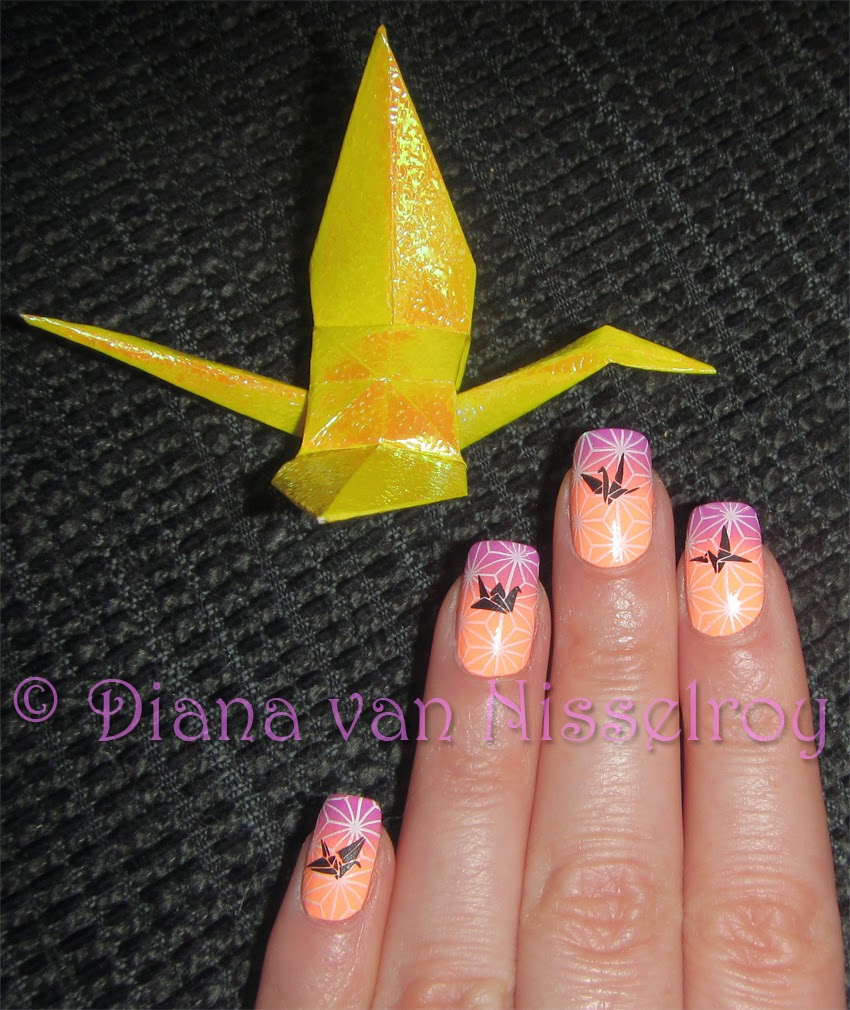 Also a picture of just the full nail stamping. 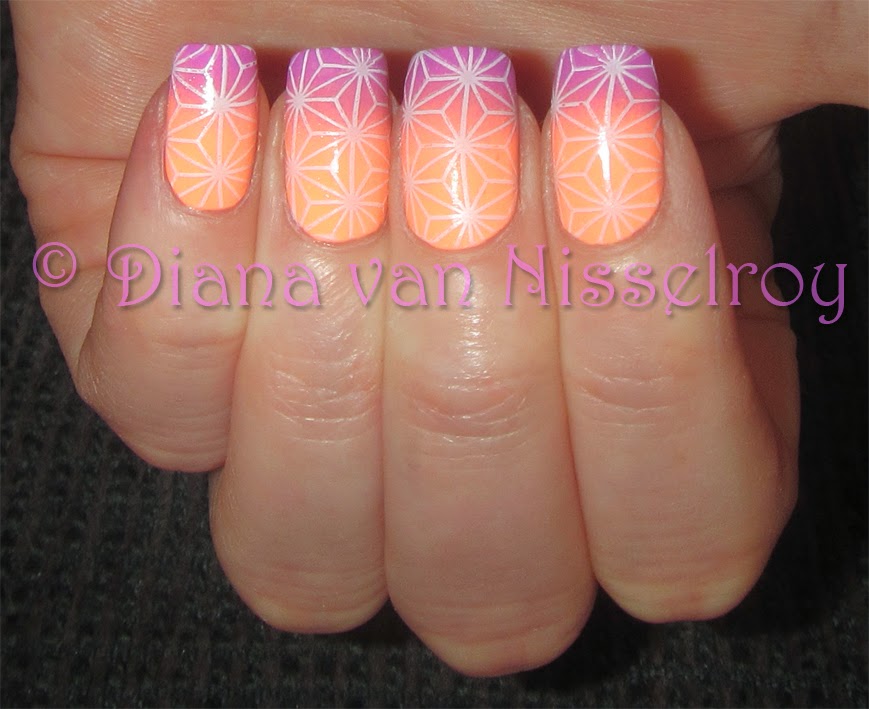 And some pics of the gradient base. 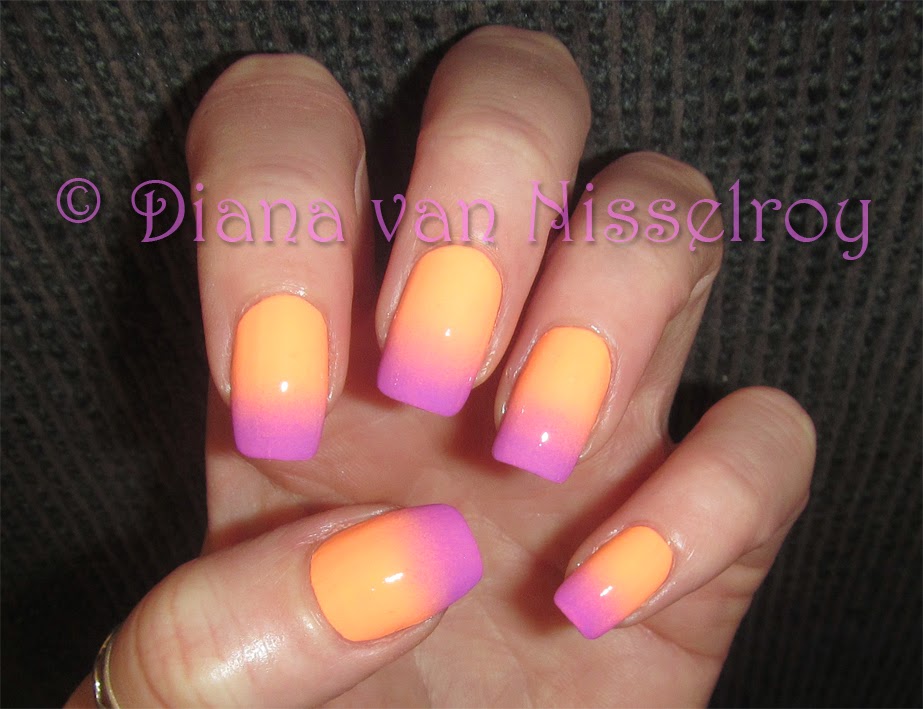 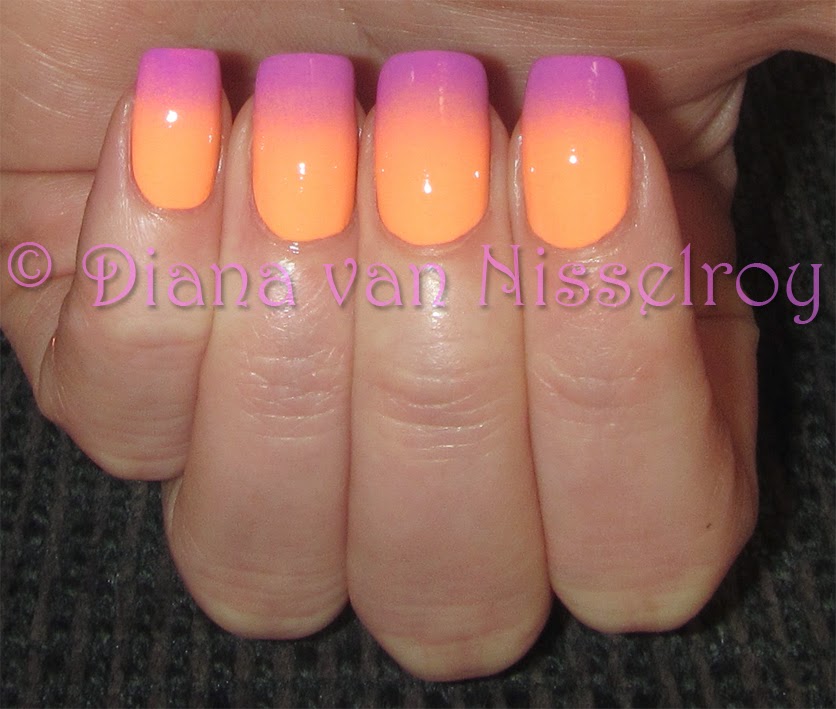 I really love these colors together.

Ofcourse I also have swatches of just the base color China Glaze Son of a Peach. 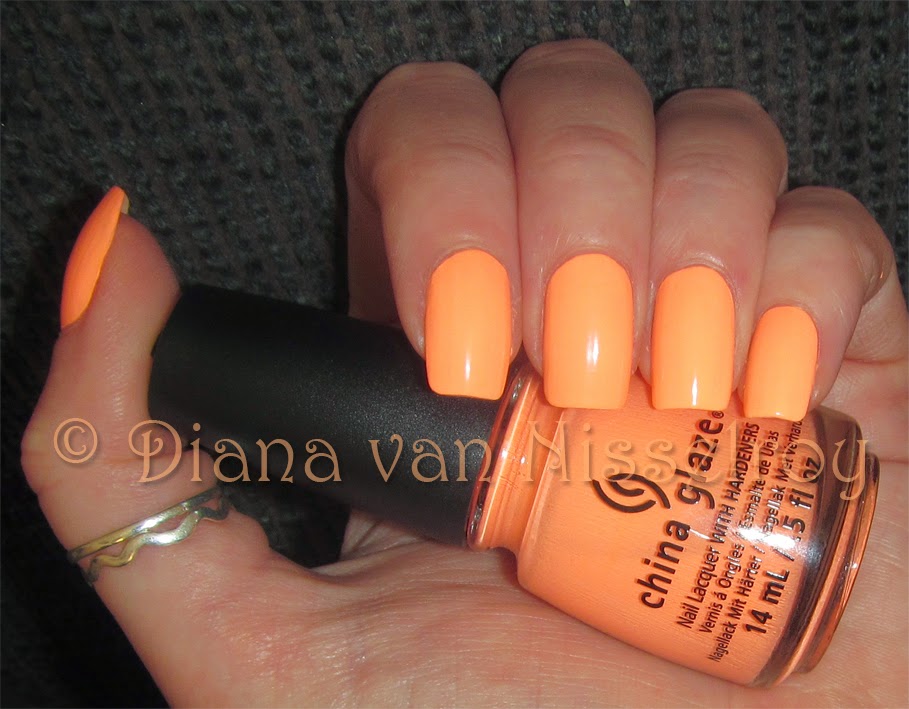 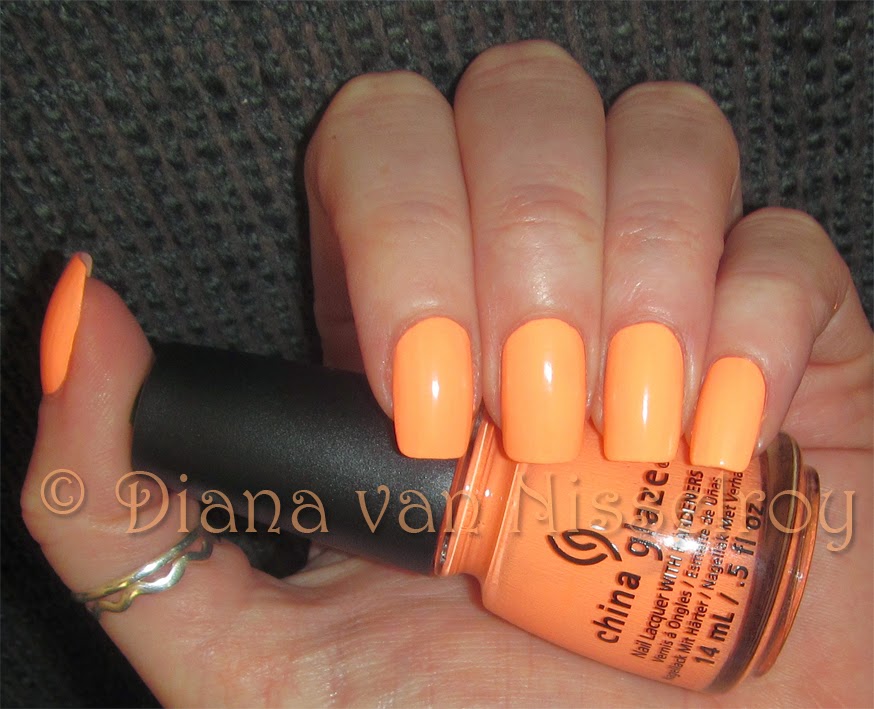 I really like this color, I did needed lots of coats to even it out and make it opague but it dries really fast so that wasn't a problem.

Now some pictures of the 4th Stampaholics plate 1000 paper cranes. 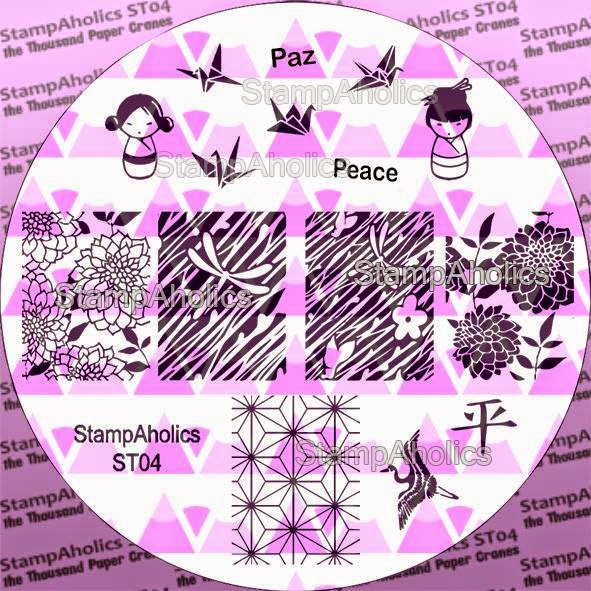 Here is the story she posted together with this promo picture.

1000 paper cranes Sadako Sasaki was two years old when the bomb was dropped on her home city of Hiroshima on August 6, 1945. Sadako seemed to escape any ill effects after her exposure to the bomb, until, ten years later, she developed leukemia, "the atom bomb disease."
When she was in the hospital, her friend Chizuko brought her a folded paper crane and told her the story about it. According to Japanese legend, the crane lives for a thousand years, and a sick person who folds a thousand cranes will become well again.
Sadako folded cranes throughout her illness. The flock hung above her bed on strings. When she died at the age of twelve, Sadako had folded six hundred and forty-four cranes. Classmates folded the remaining three hundred and fifty-six cranes, so that one thousand were buried with Sadako. In 1958, with contributions from school children, a statue was erected in Hiroshima Peace Park, dedicated to Sadako and to all children who were killed by the atom bomb.


Each year on August 6, Peace Day, thousands of paper cranes are placed beneath Sadako's statue by people who wish to remember Hiroshima and express their hopes for a peaceful world. Their prayer is engraved on the base of the statue: This is our cry, this is our prayer; Peace in the world "Peace Crane, I will write peace on your wings and you will fly all over the world." Sadako Sasaki, age 12
Source 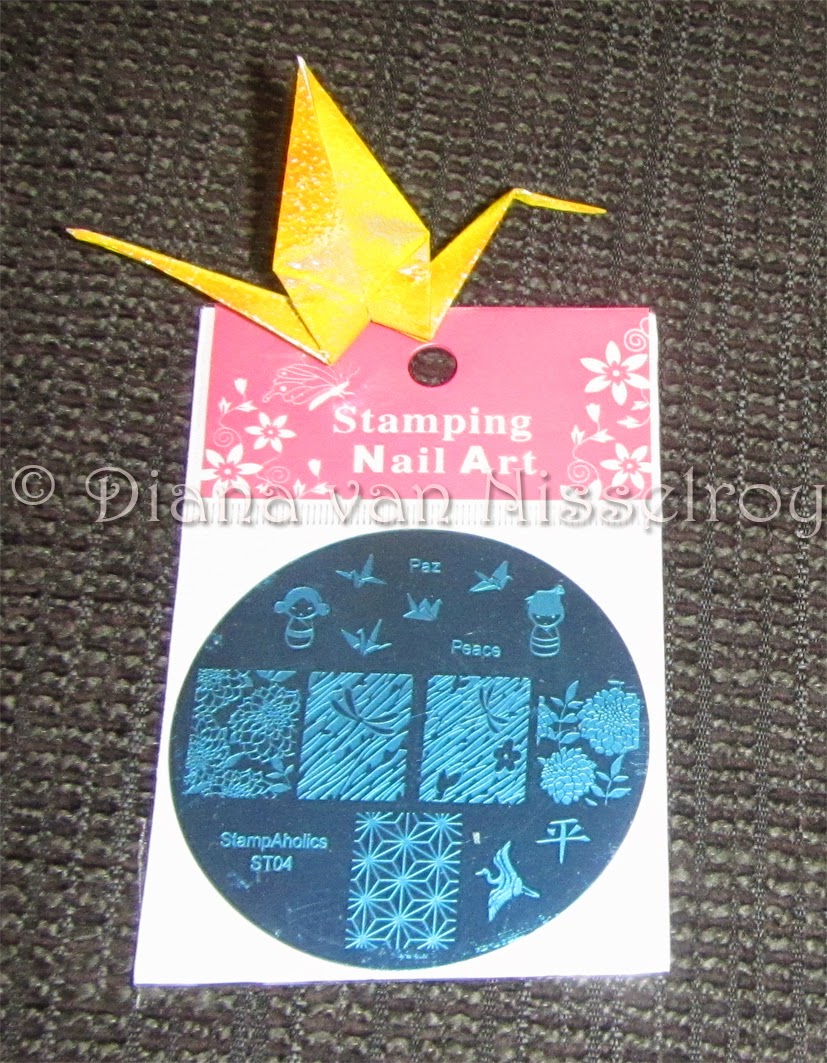 Look at all those cute images ^_^ And some quick paper swacthes.

Just like the other ST plates I love this one too. I love that is has full nail images (2,0 cm by 1,5 cm) and single images. And it stamps great.

Have a nice weekend.