Every year in the second weekend of September we have this music festival called Appelpop (Apple Pop) it's this big free music festival with all kinds of bands. In that same weekend there is also the Fruit corso (fruit parade). So I always make something fruity on my nails. You have seen my previous Fruit parade nails.

In 2011 I made these Hello Kitty apple nails :) The Appelpop logo is a green apple so that is why I chose for green apples. 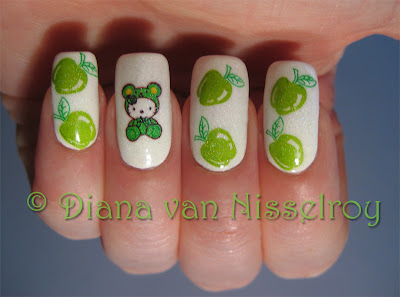 Base P2 Ship Ahoi! 010 Pure White. Stamped with Konad M55 and PSN apple green and SN green. On my ring finger a self made water decal of Hello Kitty in a bear suit with an apple on her head. On top of everything also over the stamping I added China Glaze wireless Holographic topcoat.

I believe I also have never showed my Apple pop / Fruit Parade nails from the previous years here, so lets do that this weekend :) In 2010 I did not made any because we left for our holiday then. So I will show them from 2008 and 2009.

I must think of something fruity for this years Apple pop festival and the fruit parade :)


Do you remember my Dolphin Sunset nails? 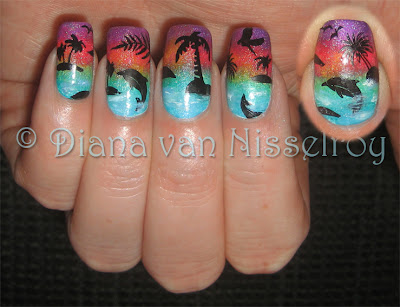 I entered them in a Summer contest. If you like to see all the entries and maybe vote you can do it here:http://nailsandstuff-shannara.blogspot.nl/2012/08/summer-nail-art-contest-pick-your-winner.html My entry is no 8 if you like them ;)
Also while you are there and don't follow her already, she as a great blog too :) with lots of posts.