Greece 2012: I am back from Zakynthos

Hi my lovely readers,
The last couple of weeks I've been showing you only older manis, that was because I planned those blog posts before I went on vacation with my dad and boyfriend. As many of you know I love Greece, my boyfriend and I visit another island every year. This year my dad went with us because he wanted to go on holiday too, his first time after my moms death.. it was really hard. Zakynthos wasn't one of the prettiest islands I've seen, but did really loved the boot trips we did. The prettiest things were on the outside of the island like some beaches and a lot of caves.

Zakynthos is "famous" for the Caretta Caretta turtle who swims in the bay of Laganas and lays eggs on the beaches there. So all my manis had something with turtles on it. I will show them to you the next couple of weeks. I also always try to take some holiday nail pictures, so I have a lot of pictures I had this on my nails more then a week so some pics you see a bit of tipwear ;)
Let's start with a nice sunset behind the mountains. 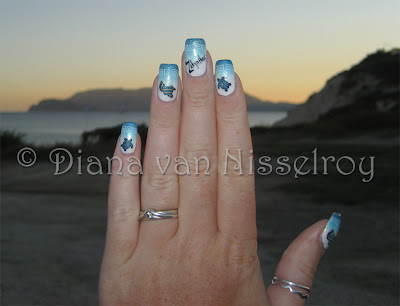 Here the picture I took before I left. 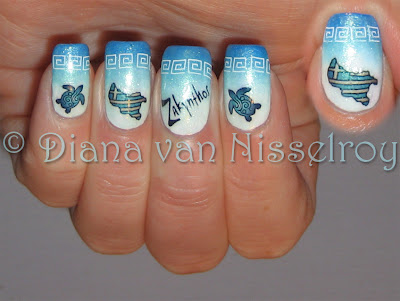 It's a gradient base with white from P2 and China Glaze Towel Boy Toy, China Glaze Splish Splash and a blue shimmer from a very old LE from Catrice over all of it. Self made water decals of the shape of the island with the Greek flag on it, the word Zakynthos and Caretta Caretta turtles. Stamped the Greek Meandros sign with Konad SN White and image plate S6. 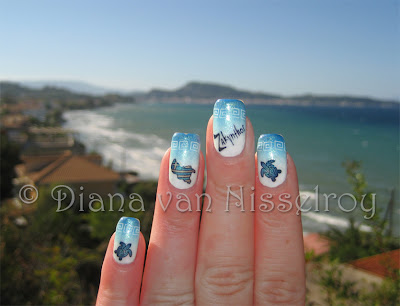 Zakynthos (Zante) town in the back. 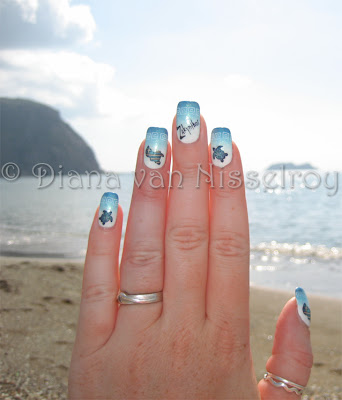 On the beach we often went to. You could only lie a few meters from the ocean because in the soft sand there we Caretta Caretta turtles nests who still needed to hatch. 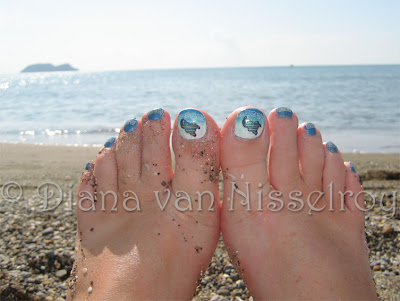 My toesies over looking the sea and a small island. 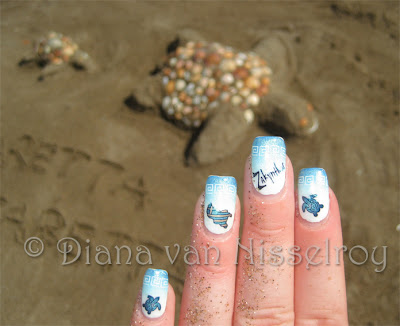 My nails with some of my Caretta Caretta sand castles I've made on the beach :) LOL She had a shell shield and also here baby ;)
Here a picture of me with my piece of sand art ;) 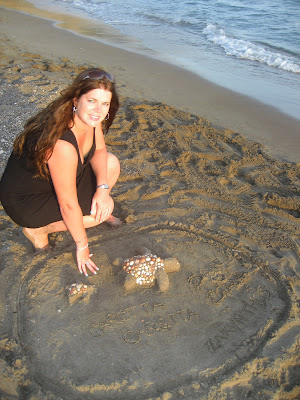 I also saw some starfish while I was snorkeling, ofcourse after taking a picture I brought them back in the ocean where I found them :) 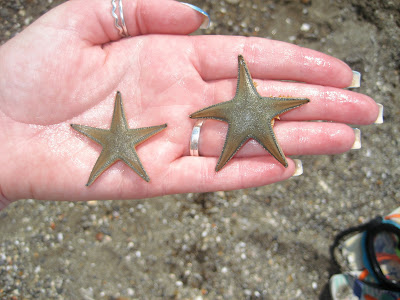 My toes again, made before we left, 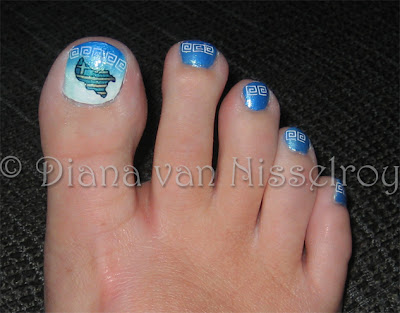 Me holding "turtle island" it is called this way because it is shaped a bit as a turtle. And also the Caretta Caretta turtles nest on the beach on that island. 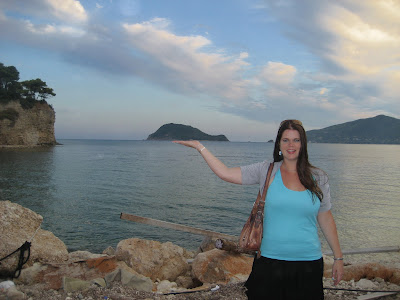 Here a pic of only the decals. 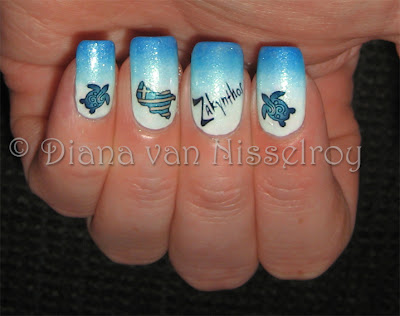 Also one of just the gradient base. 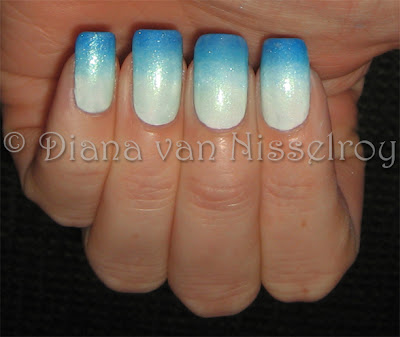 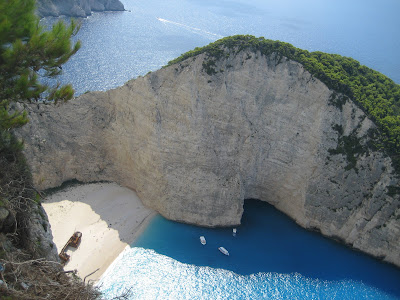 Shipwreck beach...you can only get there by boat. Or look from above like this. 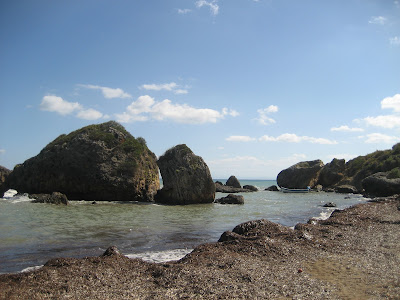 Some rocks in the sea and a lot of sea weed. 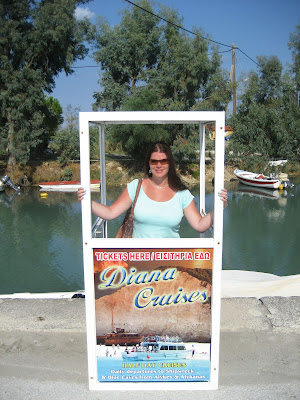 I had my own cruises there hahahahah lol :) 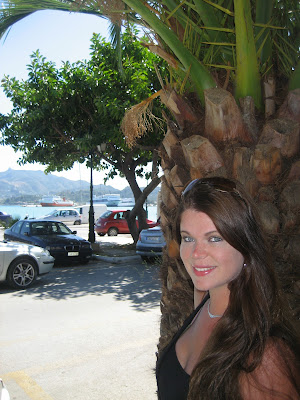 Under a palm tree in Zante town. 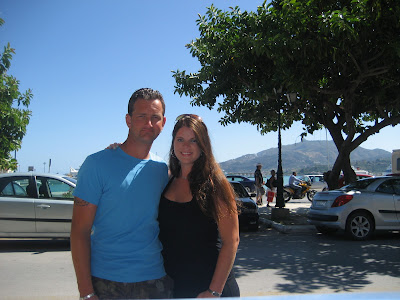 Dave and me in Zante town in the morning. 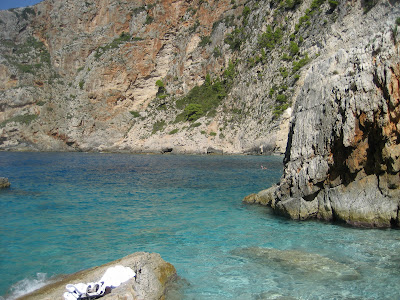 Me swimming to a secluded beach (you see me waving above to rock corner on the right). 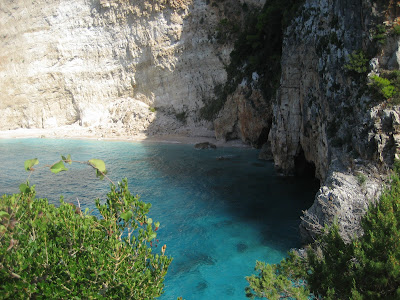 Here you see the beach I was swimming to.
I also have some pics from the Caretta Caretta turtles and from the outside of the island but will show those with my other turtle manis I made during my vacation.
Thanks for reading.
xoxox
Gepost door -Diana- op 00:26